Revolution Against Tyranny Part One: Warriors of the First Degree Chapter Nine

Mark’s smartphone told us it was 96 degrees; my dumb phone was too hot to say anything. As we walked east on Constitution Avenue toward the Capital and hopefully to the rally point, I realized I hadn’t brought near enough water. From time to time an errant gust of wind would float past us, offering perhaps a second or two of relief from the grueling, harsh sun. Mark was at least fifteen years younger and had no body fat to speak of, so he weathered the march (at least seemed to) much better than I. We didn’t encounter many pedestrians, which I thought odd. There were, however sporadic bikers rumbling past, and some even stopped and rested on the curb. We came across a couple of riders parked in front of the National Museum of American History (such irony) who had travelled from Illinois to be part of the event. They hadn’t attended the Fort Washington rally and had no idea where everyone was suppose to gather on the Mall. As Mark and I cooled our heels and chatted with them, a bicycle helmet-wearing police officer on a Segway whizzed up to us and told the riders they had to move. The guys waved their hands at the cop and said ‘Yeah, ok,’ then watched as the cop rolled to the next illegally parked vehicle. It was so ridiculous no one said a word about it. I imagined a standoff between Segway cops and Hog riders and chuckled to myself.

Soon Mark and I continued on toward the Capital, stopping whenever we heard sirens or the deep-throated sound of bikes. We talked about our time in the military and what we had done since. Mark had an easy-going nature and was a good listener, which was perfect, because I loved to talk. We trudged past the Smithsonian National Museum of Natural History on the right. Across the street was the IRS building. I gave it a quick one fingered salute. Further on was the gargantuan Natural Gallery of Art, and then we came to an unusual intersection where 6th Street intersected Constitution as it hooked slightly north to join with Pennsylvania Avenue, forming a grassy triangular island in the middle surrounded by elm trees. It seemed like an oasis to me.

It was now just after 11 A.M., and my understanding was that the ride would start at noon. We still saw bikers rolling down the wide streets, and I tried to capture them on video, not realizing until later that the tablet sucked at making videos. I cursed myself for the millionth time for not bringing my little Kodak but worked with what I had. We found another grassy traffic island as Constitution broke off again to run west of the Capital, which could be seen now. 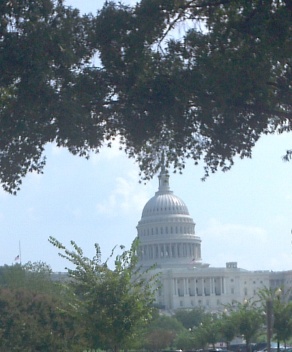 As we approached the final leg of our forced march (it had begun to feel like one – not as severe as the Bataan Death March, but in the same ball field), we came across some more bikers. We sat on the curb next to them and made sweat puddles with our butts. The biker closest to me was a real tough looking guy with his stone-faced look, sunglasses, gloves, leather vest and posture, leaning one arm against his Harley as if it were a horse. I asked him where he was from and he said Scranton, PA. I blurted out “Oh, that’s just a hop, skip and jump away!” The look he gave when he rolled his eyes at me reduced me to ash. I engaged his woman in conversation as she sat on the curb next to me, wearing more leather and patches than any three other guys. Her voice was deep and thick, as if from years of cigarettes and alcohol. I was so thirsty and hot I would have welcomed a stiff drink of anything.

We rested there for almost half an hour, watching for the unseen Muslims and turning to look whenever a biker or more roared by. Eventually the fellow from Scranton and his small entourage moved on, following a group of about a dozen bikes. Mark and I continued to sit and sweat, and doubt our choice to come to the west lawn of the Capital. Noon came and went and still no army of motorcycles. It seemed that the bikers that were still rolling through had become squad sized, 10 or 12 at a time. Perhaps they had left Fort Washington at noon, and the sheer mass of them would take at least half an hour to get to us. For now, though, the little triangular oasis to our west beckoned me with promises of shade, and before long Mark and I decided that was going to be our final stand. It was still close enough to the Capital to see it, and it offered us a good view of Constitution Avenue all the way to the Washington Monument. It was the perfect place to see 2 million bikers invade and own the streets. We shuffled (at least I did – stumbled is more like it) back to the traffic island and waited with anticipation, continuing to take pictures as we went. The horde would be here any minute.