Revolution Against Tyranny Part One: Warriors of the First Degree Chapter Six

An opening ceremony was scheduled to begin at 8 A.M. at the raised podium in front of the Fort Washington Harley-Davidson dealership. I suspected that even though the number of bikers seemed to be doubling every ten minutes the ceremony would start pretty much on time, unlike the traditional half hour delay whenever the POTUS decided to address the nation. I had always been skeptical that there would be anything close to 2 million bikers, but here at 7:30 in the morning in front of the dealership my skepticism was being noisily blown away by the gargantuan showing. The ride was scheduled to begin in 4 and a half hours, but there were already enough bikes to choke traffic from here to Timbuktu. I could scarce believe my eyes.

Across the street a merchandise table was being hastily erected, and a line had already begun to form. I had never seen bikers forming a line as if they were quietly waiting for movie tickets. Actually, I had quite a few preconceptions about bikers that were being ground into the pavement this day. There were no beer bottles flying, no barbaric displays of anarchy and no fights breaking out despite my best efforts. At one point, desperate for a photo of mayhem, I shouted in the middle of the crowd “IT AIN’T A PARTY TIL SOMETHING GETS BROKEN!” This was greeted by a few scattered cheers but no dwarves being tossed. I moved through the crowd and came upon a group of good looking biker chicks lounging against the showcase wall. I yelled “FREE DEM PUPPIES!” and was promptly given a generous display of big, hairy bikers lifting their tee shirts for me. We all had a good laugh, but I made sure to escape in the crowd in case one of them didn’t find the request funny. So much for fomenting a riot.

The line at the merchandise table showed no sign of shortening, and I had no desire to stand in line for something I probably couldn’t afford anyway. The 7-11 across the street reminded me that I needed to get an ample supply of bottled water for later, as it was supposed to be a scorcher, so I shouldered my way through the crowd and eventually arrived. Inside, the store was noisy, jovial and packed to the gills with bikers. The two little oriental girls behind the counter were wide-eyed and frantic, and the Sikh manager (complete with turban and beard) kept himself busy stuffing hotdogs in buns and dressing them or slithering his way through the mass of bikers to refill coffee urns and resupply cups and condiments. I grabbed two bottles of water (later I would wish it had been 4 bottles) and a 20 oz. Mountain Dew and found the end of the line. A young black woman dressed in scrubs filled up a personal coffee holder and then looked around, I’m sure calculating the time it would take for her to reach the cashier. To my amusement she ducked her head and made her way out the front door. Smart girl. A heavy-set and leather-bound biker with long greasy hair and an even longer beard yukked it up with whoever was next to him as he waited in line for coffee. Yes, there were lines within lines here, snaking around every aisle. If we had wanted to we could empty the store in three minutes flat, shelves and all. At one point the jolly biker pointed so someone about ten bodies behind me and told the guy to hold his spot in front of him, happily declaring a place halfway through the line. As we all shuffled toward the counter I caught the guy’s attention and invited him to step in front of me. His gratitude almost extended in a bear hug but I settled for a solid punch in the shoulder and a toothy thanks. Nobody seemed to be in a hurry. I think it was probably the most stress free line I’d ever known. Who would want to bitch about someone cutting the line with a zillion bikers all around?

I finally paid for my drinks and returned to the car to deposit them in my Jack bag (named after the duffle bag Jack Baur always toted with him in the TV series ’24’). Parked next to me was a spotless, gleaming black Camaro SS with a retractable sunroof. A solidly built young man in an OD green tee shirt was busy polishing it with a towel. In retrospect, of all the names I heard that day, his was the one I most regret not remembering. He had been a Marine in Afghanistan, had served more than one tour and was one of those rare type of men who had so much love for his country and fellow Marines that he had to be dragged away even when he couldn’t fight any more. He pulled out a large American flag on a sturdy, thick pole that had to be put together like a pool cue. He proudly told me it was his unit’s standard. Our conversation turned to the battlefield but his mood did not waver. I told him that in my experience there was nothing scarier than feeling and hearing a round fly past my ear and how it had made me feel more alive than ever before. He smiled and told me about taking a round in the chest while wearing a flack jacket, and then the time a mortar round blew up right in front of him. He said had it not been for his Medic – whom the unit called Doc (having been a Medic myself I knew it was an honorable title) – he would have never left the engagement site alive. He told me that so much of his left leg was blown away he could see his femoral artery thumping. I told him that if that artery had even be nicked it would have been lights out for him, and he laughed. He said he died right there on the battlefield and was revived by his Doc, then flown to Germany where he died again and was saved, then flown to the States where he died a third time on the table but cheated death again. As he spoke I stood there thinking how ridiculous my ‘bullet-flying-by-my-ear’ story was and was at once humbled and awestruck at this living miracle before me. He said his Gunny told him he hadn’t died because he was never given permission to do so and as we chuckled over that, I thought my absolute love and respect for this brave warrior would make me swoon. Yes, I said swoon. It’s that feeling you get when you’re faced with the true understanding of Christ’s words: “Greater love hath no man than this, that a man lay down his life for his friends.” (John 15:13) Here before me was absolute courage, honor and duty. He had given his all and still wanted to give more. I watched as he put the standard through the sunroof and secured it into place. The flag responded to the wind as I surrendered to the moment, grateful beyond expression for having been in this patriot’s company. The photo below shows him holding his unit’s standard. If you can identify him, please let me know. His story should be told. 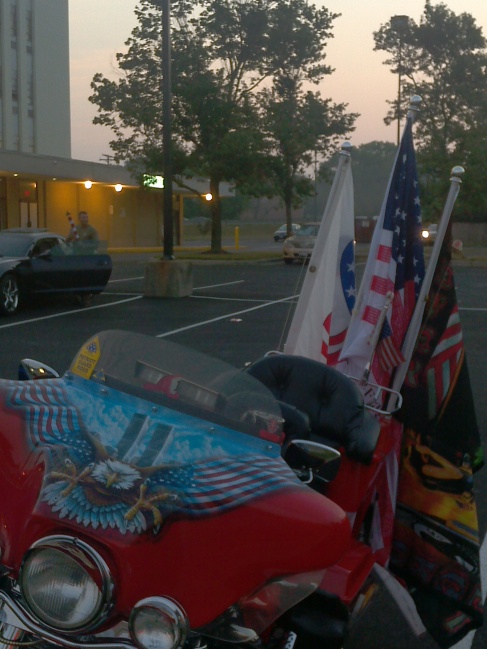