Revolution Against Tyranny Part One: Warriors of the First Degree Chapter Two 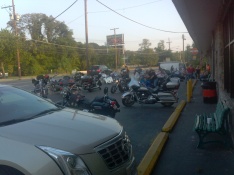 The closer I got to Fort Washington (the irony that the biker rally point sounded like the name of a military base was not lost on me) the more I saw small groups of motorcycles woven into the fabric of the thickening traffic. I readily admit that my knowledge of bikes could comfortably fit in the pocket of one in an army of angels dancing on the head of a pin, so the rides I saw on I81 North registered only as that: rides. Oh, I can tell the difference between a touring bike and a crotch rocket; the deep throated rumble of a Harley is much different than even a large Kawasaki. But ask me to point out a water buffalo or a fat bob from a corral of bikes and I’d have to make a SWAG (scientific wild-ass guess) or just shrug my shoulders in ignorance. But as the growing sea of early afternoon interstate swelled, and as the incidence of bike packs grew, it became obvious to me that this was not going to be an event catering to just one type of motorcycle. There were huge monster bikes fully dressed or bare, with all manner of paintjobs and chrome, some bearing flags like giant peacock feathers. There were mid-sized bikes, polished to a dazzling reflection or road worn, and I even spotted the occasional sleek Ninja, its rider bent over at the waist as if ready to roll under something. The riders, too, came in every conceivable shape and size, although it seemed the most common dress code consisted of leather, sleeveless shirts and shit-kicking boots. I saw men who looked as mean and weathered as old rattlesnakes. I saw upper-class professionals with expensive looking outfits that seemed to have been recently pulled right out of the box. I saw bikers as large as mountains with long, braided beards and hair that trailed them like silver smoke. I saw wiry bullwhip-shaped riders facing the wind like unmovable steel posts. They wore helmets that wrapped around their entire head in psychedelic bubbles, with and without shields but always wearing sunglasses so dark it was like looking into twin holes. There were half-helmets, shorties and even a few with german kaiser spikes growing out of the top like militant unicorns. I saw more than a few who wore no helmets at all, with bandanas tied around their skulls like angry pirates, or bald and shiny as if light sprung from their heads. Some had women stacked behind them who looked as mean if not meaner than the riders themselves. These co-pilots had the luxury of being able to look at the environment around them, so their heads swiveled this way and that as they hung on by wrapping one arm around the biker or clamping their powerful legs to either side of the ride. I had a flyer announcing the 2 Million Bikers to DC, emblazoned on the top with a toothy hog straddling a bike, and one more than one occasion felt the urge to slap it onto the passenger window as I passed the bikers so they would know I was there for the event, too, but never actually risked it as the traffic demanded my full attention. Eventually my exit approached and I pulled free of the mob of vehicles, noticing that there were bikers both in front and behind my car. I wanted to remain in that noisy sling of throaty two-wheelers but my gas gauge insisted I stop to fill up.

After throwing far too much money at the pumps I continued to follow the unemotional directions of my GPS, and soon found the Fort Washington Harley Davidson building. There were perhaps a dozen bikes parked along the long windowed front, and leather-draped men stood in clumps facing each other, their arms at their sides or gesturing wildly. I pulled my Ford Focus to a bare spot on the side of the building between a rusted out Chevy van and an F150, got out and stretched the kinks of the trip out of my joints, grabbed my tablet and went around to the front, acutely aware that I stood out like a water buffalo in a pride of hungry lions.

I came up to a circle of bikers. Two of them – thick-wrinkled and sun-baked – sat on a wooden-slated green bench against the glassy building, and a third in an orange sherbert colored shirt leaned against the huge window beside them; above their heads an American flag hung motionless as if listening to every word. The others stood in front of them. The man whose back was to me wore a bright red t-shirt and had a sprinkling of salt-and-pepper hair resting on his shiny. My road-weary imagination made me think of Wilford Brimley, and the image was reinforced when I saw his thick, snow white and droopy mustache. A compact woman with short blond hair in a two-toned shirt nodded at me as I joined the conclave. A large man to the right of the woman talked in a deep rumble, and the others listened attentively. His clean-shaven face was the color of stained mahogany, and his sky blue eyes fairly glowed in contrast. He wore a sleeveless leather vest with an assortment of patches sewed on. I recognized the 1st Infantry insignia, OD green with a big red one, and among the others I spotted a round yellow patch with a stand of bamboo stalks and a red dragon hiding behind it with the words below: Republic of Vietnam Service,” and a black spade with the word “Vietnam” emblazoned on it.

“This country’s going to hell in a hand basket an’ everyone’s just sittin’ around with dere thumb up dere ass!” He had a Chicago accent so thick you had to use a pizza cutter to understand him. “We gotta do somethin’ before deese damned politicians run us into da ground or sell us out to dose fuckin’ Arabs! I think it’s too late to just vote the bastards out. Dey’ve done too much damage. I’m tellin’ ya, it’s gonna take a revolution ta get us back on track!” He slashed his black-gloved hands in a vicious horizontal line. “Tear the whole damned thing down to da ground – to da Constitution! – an’ start all over again!”

As the others, including myself, nodded, the woman spoke in a voice roughened by whiskey and cigarettes. “People today don’t give a shit. They just want the government to take care of ’em.”

“Dat’s because dey don’t know any better! Hell, I give a shit, an’ dere’s 2 million others on da way here just like me dat give a shit! We gotta get da word out, get enough people pissed off and get organized! Da government should be scared of us, not da udder way around!”

The vet’s words struck me like a number 9 ball peen hammer between the eyes. Maybe it was too late for the democratic process to make things right. Organization, information and a healthy portion of outrage was the prescription for a successful revolution to break from the chains of tyranny. Two million angry bikers was a good start, too. 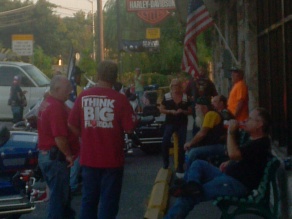